Important Message
We are now FULLY open for Test Drives, Sales and Workshop. Please call to book an appointment. Stay Safe, Everyone at West Country Cars 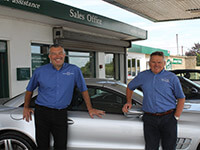 Meet John
John Sugg is one of the directors of the company alongside Andrew, they have been in business together longer than some of their employees have been alive and you can easily distinguish between them as he is the shorter one. John has always been a part of the motor trade and mostly the good part! He has an obsessive eye for detail which makes him a joy to work for.. John's favourite cars are Porsche's a fact his family know all too well with the steadily growing collection. However everyone who works for him will agree that he is an all-round good egg!

John Currently drives a Porsche 911, his dream car is a Ferrari 246 Dino.

Meet Andrew
Andrew Roles the other director of the company alongside John whom he occasionally frustrates with some of his unique trade purchases. Andrew has always amazed us with how excited he gets with some of his purchases. Andrew and his lovely wife have just welcomed a little baby girl into the world so you may often see him looking a little tired due to lack of sleep! Much the same as John everyone who works for him will agree what a lovely man he is.

Andrew currently drives a 2003 Volkswagen Golf which has in excess of 250,000 miles on the clock and has owned for 13 years!

Meet Olivia
Olivia recently joined the office staff, however she has been known by us all for years as she is John's daughter, unfortunately for Liv she looks like her dad so everyone puts the connection together pretty quickly. After a career in estate agency Olivia has joined our sales department and is also responsible for all our social media and marketing. Olivia has recently upgraded her mini after just 150,000 miles to an Audi A3 that now has little more space.

Her slightly more realistic dream car is a Porsche Macan 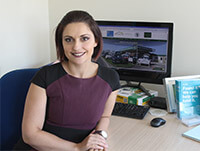 Meet Tara
Tara is part of the office staff organising all the day to day running of the company. Prior to joining West Country cars she worked at a now defunct main dealer in which she proudly announces that she was so busy that she managed to plan her own wedding. Tara's hobbies include the newly discovered joys of gin and her two young children, there are rumours that they may be linked. 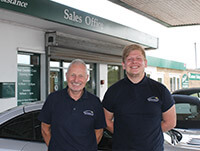 Meet Colin and Carl
Colin is the head of the workshop and the most experienced member in our team (see experienced as oldest). He can regale us all the times he worked at Abbey Hill and some of it is faintly unbelievable (maybe age has set in). Colin lives locally to the garage which is ideal for the rest of us as if there is a problem he instantly becomes the man on call, a role he cherishes especially on the weekends or late at night if a car alarm is going off. He frequently enjoys trips to his caravan but he assures us he is not Romany, and we can believe that as he is just an all - round great guy.

Colin currently drives a Volkswagen Golf as he wanted to upgrade his Civic to something that was petrol and automatic and the Golf suited his needs perfectly.

His slightly more unrealistic dream car is a Ferrari Dino

Carl
was our apprentice technician, but when his apprenticeship ended he didn't leave so we had to keep him. Carl is not from round here originally hailing from Hemel Hempstead which was once voted the ugliest town in Britain, not that that reflects on Carl at all. He is the proud father of two young boys who are apparently just like him, I feel sorry for their teachers. In his spare time Carl is a keen boxer who could be the next Anthony Joshua or not..

Carl currently drives a Ford Focus which he bought because it was cheap and he can insure it and it has provided him with many hassle free miles.

His unrealistic dream car is a Ford GT, clearly a Ford fan. 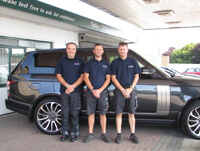 Meet Dave
Our head valeter for over seven years! And having previously been working in the same profession for over 25 years! Dave is a family man with two children and a wife who one day may be happily married. In his private time Dave is a keen lycra warrior or cyclist as he prefers to be known and will happily travel over 50 miles a time, god knows why he doesn't take a car as it would be much easier.

He is an avid supporter of Manchester United which causes a healthy rivalry with Luke a Liverpool supporter.

His more achievable dream is a BMW 325I Sport.

Meet Luke
Luke works in the valeting department having tried nearly every other profession before settling on a life hoovering cars. Luke has many nicknames many of which are not repeatable in polite conversation this is owing to his unique personality which is like marmite luckily we like marmite. Luke is a keen fisher and was also for a short period a keen runner but now those shoes are collecting dust like many exercise machines.

Luke currently drives a Mercedes A-Class which seems to be a magnet for punctures but otherwise has provided him with economical transport.

His more realistic dream is an Audi RS3

Why not talk to us directly by giving us a call using one of our numbers below or sending us an Email.

West Country Cars staff were good because. Aaron was attentive, polite took time to explain everything. Also sorted a problem that my wife had with the purchase of a vehicle from two months earlier. Considering all the different things to think about when buying a new car he made the process an enjoyable event.
Mr N, Nissan

Search for a vehicle

We use cookies to help our site function correctly and to understand how it is used. By clicking "I understand", you agree to us doing so. You can find out more about cookies and how to manage them in our Cookie Policy.